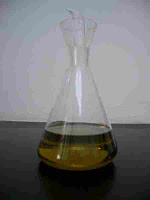 ....is the Olive Oil decanter that the Brancolis brought with them when they arrived for dinner on Saturday. I know I ought to feel embarrassed by my past vocal praise for the identical item that sits on the dresser in the kitchen up in Brancoli - but when coveting your neighbour's ass can have quite such a positive outcome, it's difficult to regret having done so. The object itself stands a foot tall, and drizzles perfectly from a stopper held in place by its ground glass edges. I know it's considered a bad idea to keep oil inside clear glass - the effect of sunlight is supposed to denature it over time, which is why good oil always comes in green bottles - but the rate at which we consume it here leaves little opportunity for any de-naturing. And anyway, the decanter has now found its place on the glass shelves at the back of the kitchen, where no direct rays of sunlight ever penetrate, and any self-respecting vampire could feel perfectly at ease....

ades. Next stop the frozen wastes of north Sweden, and we talked of her likely future meals of rotten herring and potatoes ( always potatoes in Sweden!), as we chowed down on Squid Ink Ravioli, stuffed with Sea Bass, in an Anchovy sauce, followed by Rabbit, with Celery sformati , and finished with Passion Fruit Tarts and Lemon & Vanilla Ice Cream. Conversation drifted from Swedish food to Swedish drink, to Swedish midsummer parties - unforgett

able for a whole host of reasons, not least the subsequent Swedish hangovers - to Russian parties, and Japanese parties.........and the waist-enhancing after-effects of salmonella-inducing sashimi (1984, I think that one was.....one of the Brancolis and I were fellow sufferers on that occasion). Over dessert, we were wandering great dive-sites of the World, and by the time the grappa was being poured, it was a question of the relative aesthetic merits of baby yellowfin sharks as compared with giant barracuda. By the time the candles were burning low and the heights of Brancoli beckoned (if not the drive to get there, I'm sure) it felt as though we'd managed a grand tour all of our own, in the course of the evening......

Salad of Yellow & Red Peppers, with Capers and Anchovies.

Peaches, stuffed with Almond & Chocolate.
Posted by Pomiane at 15:55

Oh, you do paint a sumptuous picture with your words. I wish I could have been at that dinner party - for the conversation, the food, candlelight, wine and grappa. Those are lovely moments in life, and also part of your theory of coming together over food. (Also, I am half Swedish and have never made it to Sweden to enjoy its offerings. However, when I read or hear about it, it feels so familiar.)

The decanter is gorgeous!!!