Lavender! I've always - in the back of my mind - been aware that lavender has culinary applications, but I've never really taken them seriously. I've read about, but never been tempted by, combinations of bitter chocolate with lavender ( and, I confess, I'm still a little iffy about that one - there are very, very few arguments for adulterating chocolate!)....and I recall on one occasion eating some lavender ice cream at the Downderry Lavender farm, near Tonbridge. It was....pleasant. But it didn't particularly have any Wow! factor......just.....pleasant. 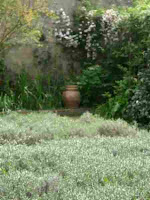 We grow lavender. In fairly large quantities. Actually, I have to qualify that. We have been trying to grow lavender in fairly large quantities for the past few years. Increasingly pitiful crops of flowers year-on-year have resulted in deep gloom, and eventually in research as to where we've gone wrong. It was at Chelsea, earlier this year, that we were finally put right, by a lavender expert from the Isle of Wight. Soil far too rich. Lavender loves impoverished soil! (How perverse is that!?!). And so, the lavender plants have now been consigned to death row, and this autumn will be ripped up, in order that the soil can be mixed with 70% gravel, and a new crop planted in their place......The process provokes thought.

In any event, the evening before last, I was pondering the menu for dinner, and more specifically, what to serve as an accompaniment to Fig Ice Cream. I had some nectarines, and decided to try poaching them with some lavender heads. My expectation wasn't high - I though

t the result might be vaguely interesting, but no more. I made a sugar syrup, and added the rind and juice of a lemon to it, before submerging the stoned and quartered nectarines. Then I chucked in half a dozen fresh lavender heads - of the few that have actually deigned to appear this year - and wandered off to get on with something else, as I left the fruit gently poaching away. Ten minutes later, wandering past the kitchen french windows I was absolutely stopped in my tracks. The smell was intoxicating! Unbelievable.... And the fruit when chilled and later served was a revelation!

The remaining fruit and syrup will be used this evening for a lavender-nectarine sorbet...but I'm now racking my brains to think what other uses I can find for lavender. I wonder if it would go with Pork?

Risotto of Yellow Pepper and Fagiolini

Grilled Tuna Steaks, with a sauce of Mint, Green Olives, Sultanas and Capers - served with Celery, peeled and sauteed in Butter

Sorbetti of Raspberry and Lavender-scented Nectarine
Posted by Pomiane at 11:50

You've piqued my interest in lavender, especially with the nectarines. You might want to check out Lucullian Delights blog as she uses lavendar frequently. You have me very curious however about your risotto tonight. I have never put beans in a risotto thinking that the shapes and textures would be too similar, but I already trust your palate and skill, so this must be a good combination. Please let us know how it is. Thanks as always for the inspiration!

P.S. Tonight I made a plum galette and decided to let the sliced plums sit in a bit of sugar, lemon juice, a dash of acquavite and 2 lavender heads. I was admittedly timid of the lavender. The result was wonderful but with no apparent lavender flavor, but the galette was more aromatic than usual. Coincidence? Next time I feel brave enough to add more.

Before you rip up the lavender plants, you may like to take some cuttings from them, they root pretty easily, and don't need any attention once you've taken them. Put them round the edge of a pot which has a lot of sand mixed with the soil (the same thing, poor soil), and leave them somewhere sheltered but where they'll get some rain (otherwise you'll have to remember to water them), and then you'll have lots of new plants.

I'm sure a book can tell you how to do it properly, but I find that English lavender is so vigorous that you don't need to worry about the detail. The main thing is to make sure there's not too much leafy stuff above the soil, and that there's about an inch of stem beneath the soil.

I'm just about to make lavender vinegar, which Frances Bissell says is useful in the kitchen (deglazing fish pans, I'll keep you posted) ... also lavender sugar. Just like you, I'm underwhelmed by the idea of lavender in chocolate (and shortbread), so not sure that this will be worthwhile, but it's worth a try ...

It's a good thought - I hate the idea of merely ripping the things up and casting them into oblivion. As it is, the 'act' is planned for some dim and distant future (like the other side of November) i.e. far enough away that I don't have to dwell on it too much.

Do you find Frances Bissell any good? I find that I want to, but too often find the results of her recipes a little bland.....