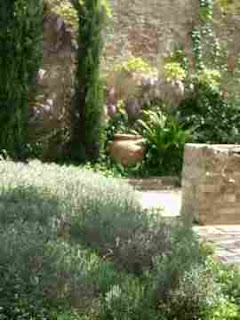 The cheap-and-nasty yoghurt trick appears to have worked - only two weeks after application, the pots already seem several decades older, and this is even before we enter the lichen-growing period of the year......all looks promising!

The Brancolis - originators of the yoghurt advice - came for dinner the other evening, laden with gifts. Bottles of both this year's and last year's oil harvest (the former exquisitely 'grassy', and to be used sparingly on salads, the latter now consigned to cooking purposes), plus armfuls of fresh lemons (since the Brazilians appear to be nicking all of ours!), and a hygrometer, in order to measure the strength of our grappa distill 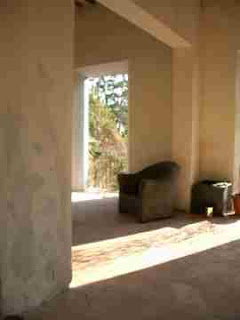 ation from Christmas. Gratifyingly, it came out bang on 45% proof, which is exactly what it should be (and not a 'grado troppo forte' as Umberto had opined knowingly when he tried it). Since we've now consumed almost all of the Christmas production of five litres, it's time to get on with the next distillation batch, this week, or we risk running dry.

Building work proceeds apace....which suggests that the project might just about be completed this side of terminal loss of patience! The newly-created loggia will be blissful in the summer - actually, it will probably be blissful as soon as it's free of builders. Destruction elsewhere is practically over, and the start of the long, slow climb to a world free of brick dust and the smell of damp plaster is significantly underway.

One for the annals: with the Brancolis, we broached the bottle of Recioto di Soave that Laura and Giovanni had brought when they came to dinner the other week. Sublime. Another version of bottled sunshine. And it went splendidly with Chocolate and Apricot Tart......

Lemon Souffle Glace (lemons thanks to Brancoli. )
Posted by Pomiane at 16:48